XRP/USD has turned in a winning streak the past few days as the cryptocurrency has bounced off lows.

XRP/USD is trading above the 1.03000 level as of this writing, and its ability to trade higher the past handful of days may be starting to build speculative fever. After hitting a low of 0.79900 approximately on the 29th of May, XRP/USD has incrementally traded higher, and it touched a high of nearly 1.09000 on the 31st. However, since then, Ripple has essentially consolidated, but importantly, it has been able to stay mostly above the 1.00000 juncture.

The cryptocurrency market has shown some stability the last few days of trading. XRP/USD, along with other major digital currencies, has produced some gains and there has been a lack of volatility. This can be read in two different ways by speculators. On one hand, traders may suspect that the lack of volatility is a good sign, which means that the nervous sentiment which has been abundant in the cryptocurrency market has subsided, and the lows which were seen last week will be used as solid support levels.

A negative viewpoint to the lack of volatility from skeptics, however, could be that the lack of volatility and inability to produce a significant spring upwards may indicate that there are not enough buyers in the market. The skeptics also might suspect that the reason the prices have stabilized is because speculative elements from the public are taking a wait-and-see approach, but long-term backers of cryptocurrencies are holding onto their positions until the next big wave of violent trading erupts. XRP/USD awaits the unknown momentum.

XRP/USD is near important support and resistance levels, which make the two perspectives noted above worthwhile to contemplate. If the value of Ripple stays above the 1.00000 level in a sustained manner, it may be a short-term signal that additional buying can develop, and nearby resistance levels will become the focus and speculators can potentially take advantage.

If XRP/USD drops below the 1.00000 mark and the broad cryptocurrency market shows duress, traders cannot be blamed for believing that support levels will come into play again. The short term within the cryptocurrency market looks like it will produce volatility soon, and traders should anticipate that the tranquil conditions being seen will evaporate. The use of risk management remains vital. Traders looking for a small move upwards short term cannot be faulted, but they should have their limit orders working properly so they can get out of their positions as needed. 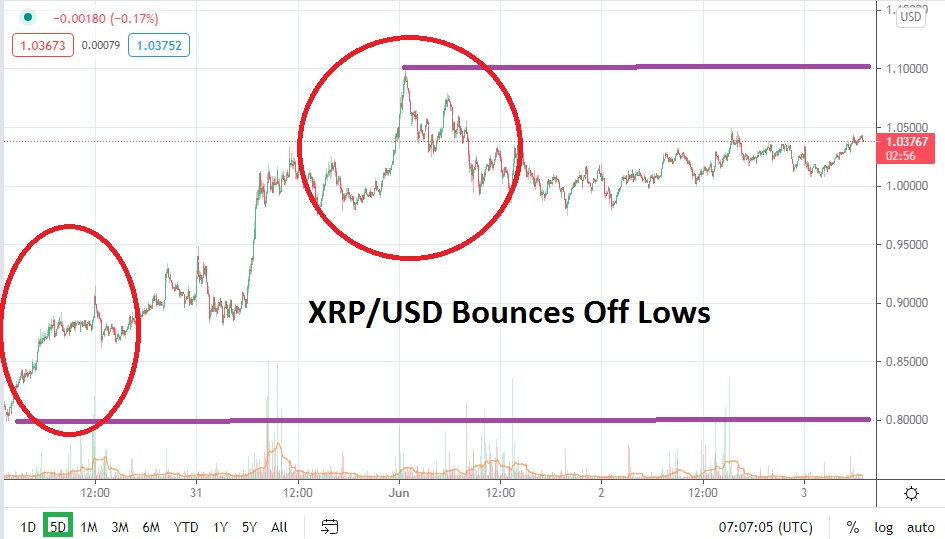